This weekend during the final round of this year’s GP3 championship Alex Albon will try to steal the title in his rookie season in the series. Before the races at Yas Marina circuit Thai who was born in London is 29 points behind the standings-leader, Charles Leclerc. During the round in Malaysia Wojtek Paprota spent some time talking with him about his racing career. Alex was keen to share some details of his origin, the current season in GP3 and plans for the future, complaining about being quite old. He is 20…

Alex, although you have a Thai citizenship and you keep racing under the Thai flag, you spent most of your live in Europe. Why?

I am half English, half Thai. I was born in London. Obviously, commercially and because it makes me stand out, I decided to be a Thai driver. However, I see myself as much Thai-national as I do British-national.

Your dad was also a racing driver - how big impact did he have on your career and on the decisions you have been making over the last few years?

It all begun when I was 7 and I got my first cart. Before that already I was a huge fan of Michael Schumacher, because of course my dad used to take me to Formula 1 races at Silverstone. For the first two seasons of my racing career when I was 7 and 8 it was just me and my dad. He was my mechanic and I was driving around my home track. He definitely has the biggest influence on my racing career.

This year you graduated to GP3 series after having a solid campaign in Formula Renault with some great results, as well as one year in Formula 3. Those series are significantly different in terms of the tires and the cars themselves. However, it doesn't seem that something has surprised you here, hasn’t it?

Yeah… Of course the main difference is the tires. The Pirellis are a lot more sensitive than the Hankooks and the Michelins that we used in Formula Renault and Formula 3. We knew that coming up to the championship. Of course ART has a lot of experience and they teach the drivers how to manage them and tell what to do in a certain situation. Of course at the beginning it was a little bit difficult, I would say especially through winter testing. I think that all of us in the team, rookies, struggled a bit with the tires' work, but once we have understood it, it is fine. It is a racing car, it has four wheels, so you can manage to handle it.

What kind of problems did you have to tackle at the beginning of the year?

Just making the tires last. To drive quick and also to keep the tires alive. When you are driving Formula Renault and when you are driving Formula 3 you are driving 100% during the whole race, which is the only thing you are focused on. Even in karting you are driving from start to finish as quick as you can. In GP3 it is all about managing tires, driving at 98-97% of your potential and just keeping them alive. That was the hardest thing for me at the beginning because I was driving 100% for new tires and then when it came to race simulation, I was driving for 80-85% because I was almost too scared to damage the tires, but there is a fine line between the race performance and saving the tires. 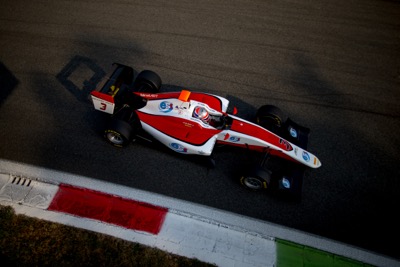 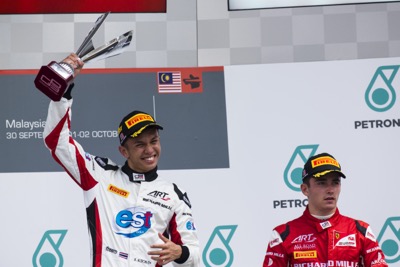 Do you think that GP3 series should be even more technically advanced or it is fine the way that it is?

At the moment it is good. If you make it too quick, it will be too close to the GP2. Of course Formula 3 has a lot more downforce which is a good feeling but I think that next year with DRS coming in I think it will be a good set. I think that the one thing we are lucky in GP3 now is overtaking. I think at the beginning no-one really understood the tires and you had people with huge tire degradation falling backwards, but now it seems that almost all the teams understand how the tires work. Over the first 3 laps there is a lot of overtaking and then there is nothing happening, but during the last few laps there is a bit more action. I think it is a shame in a way but the risk can eliminate a lot of these problems.

What was the reason behind you being very competitive since the very beginning? Although you are the rookie you are constantly racing at the front of the grid while some drivers who are here for the second year are still somewhere at the back of the grid.

First of all, ART as a team is really, really strong. I can honestly say that they are the best team in the grid. On top of that, I have 3 very quick team-mates who follow each other’s data and just help each other to develop our skills as well as we are learning from what each other is doing. It just helps us to improve so much quicker, especially through winter testing. It is not even about ourselves but about the balance of the car. We can test four different things on four cars and come quickly to the conclusion after one run. I think those are the reasons why I have been so competitive straight away. Of course the experience the ART has as a team place us at the position where we can arrive to every race competitive. Even if the car is not perfect, we can still fight for the podiums. I think there are some teams who can fight for wins and podiums at some tracks but then, going to another race and they struggle and they don’t really understand why.

What is the biggest challenge you had to face this season? You were talking a lot about the tires - is it them or anything else?

I think it is purely about the tires. The car itself is quick but it is not difficult to drive. In the qualifying it is purely about the driver and the speed and the main difficulty in GP3 is how to build up the tires, how to manage the pick, how to bring it on in one lap and keep the race pace. In Formula 3 and Formula Renault you are just driving as fast as you can and in GP3 you are taking new elements on board.

You have also mentioned that ART is by far the best team on the grid, what is of course true, as you have already won this year’s team’s championship. What can you say about the atmosphere within the team? There is you, Charles, Nyck and Nirei fighting for victories and podiums and, what’s more, now you are fighting with Charles for the driver’s championship. How does the cooperation look like between you?

It is really good. I think that you can assume that just because there are 4 quick drivers and it is going to be a bit of fiction between them as there is in Mercedes, but to be honest there isn’t any of that. We are young and we want to learn so we are not afraid to ask each other what they are doing and also to give the answers back. Of course the team is very good about that. With good team-mates it really does help to become a better driver. 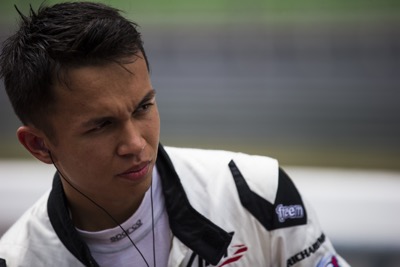 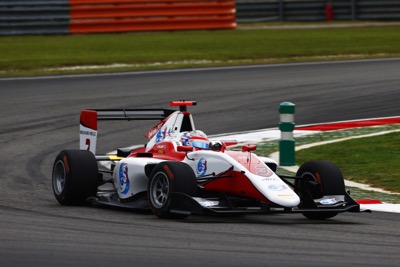 At the beginning you also mentioned that you are half-British, half-Thai. When it comes to British racing culture, I think that everybody knows how it looks like, as it is the home of motorsport, but what can you say about Thai racing culture? How does it look like?

Motorsport in Thailand is not that popular and the interest is pretty small I would say. They like the GT racing and they like the tuning but it is not quite yet at the level where it is in England for example or in Europe in general. But it is getting there. There is more people in Thailand willing to understand what the F1 is. Of course with my sponsors as well we try to help them, as they understand motorsport as well. It is a new thing for them, but they already have great tracks, like the one in Chang. There is World Superbikes round, there is SuperGT round and it is getting bigger and bigger. I am looking forward that hopefully one day there will be a Formula 1 event in Thailand.

As far as I remember there was an idea to host a Formula 1 Grand Prix in Thailand and even some people from Thai motorsport have been in touch with Bernie Ecclestone but something went wrong and the race hasn’t taken place. Do you know any more details about it?

I don’t know so much about that information. I know that there are of course people in Thailand who really want to have an F1 race. I can fully understand it and I think it would be great for Thai people to have an F1 race and a new hobby. I think that they will fully support and enjoy this kind of motorsport in general. I heard the idea about the street race but even the track in Chang, what is actually owned by my sponsor. The circuit is graded and it is ready for Formula 1. It is a really good track and the facilities and everything is as good as everywhere in the world. There is a place for it and it is just a matter of getting the audience. I definitely can see it happening in next 5 years of something.

Do you think that people in Thailand are mature enough for an F1?

Thai people are extremely enthusiastic about those things and there is a group of people that actually love motorsport. The karting scene is getting bigger and bigger and there are a lot more Thai drivers coming in to Europe who are doing a great job in karting. I think it is a matter of time until motorsport really takes off but there are already a lot of drivers in GT races and of course they have the money to race. However, it will be a few more years until it gets its momentum but I am sure that the Thai people will love it.

Where do you see yourself next season?

I think that the goal is to move to the GP2. After that, what the future holds I have no idea. I just take each year, or each race even and see from there. I think that another year in GP3 wouldn’t do me any more knowledgeable. I am quite old already, as I am 20 years old and I think that today, looking at the Formula 1, the benchmark is getting higher and higher. You have to move on and be quicker and quicker. I believe I am ready for GP2.