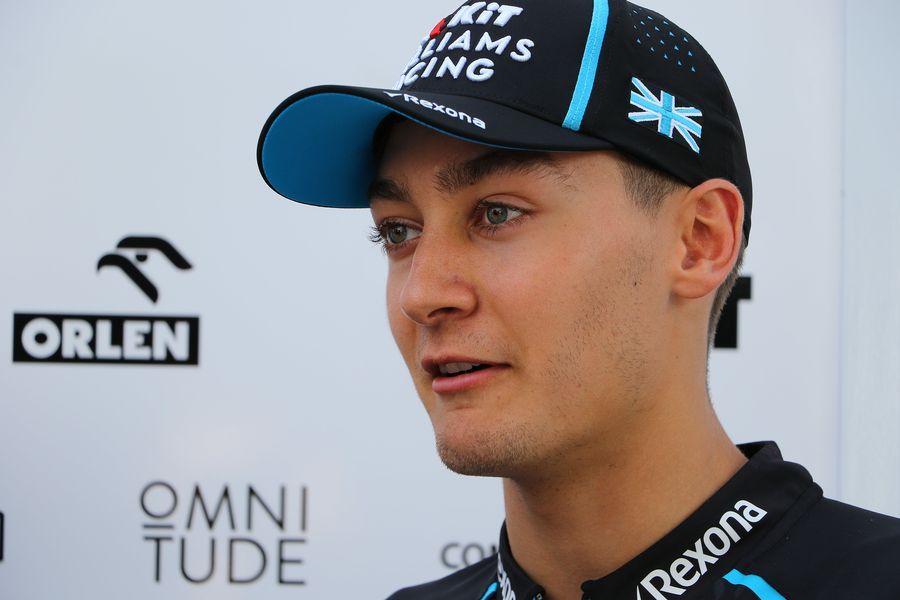 Last year’s Formula 2 champion George Russell made a jump into Formula 1 with Williams this season. The Brit has joined Robert Kubica in the team and while he hasn’t been able to fight for the top spots, he acknowledges the progress made by his crew.

George, the last race in Hockenheim was pretty crazy and the team scored their first point. Do you think that a bolder strategy would have brought you an even better result?
Yes, but it’s so easy to look back in hindsight to say we should have done this. At the time we were making the best decision possible with all the information we had at the time. If you could make the decision afterwards, then it’s easy. We could have finished higher, but this is how the race panned out.

How do you rate the overall progress of the team since the beginning of the season?
We have been making progress, even if the lap times don’t truly show it. It’s just a long process. It’s sometimes frustrating because these things take so much time, but we are slowly but surely going in the right way.

Could you compare the car to that you had when we last spoke during winter testing in Spain?
The car is just much easier to drive. It was a bit of a nightmare to drive it in Spain but now it’s more comfortable. Now we need to spend the time to get more downforce in the car.

There have been some personnel changes in the last few months, for example Patrick Head came back as an advisor. Did it affect the way team is operating?
I am just driving the car. Obviously, I spend a lot of time with the team but that is a question for Claire [Williams – deputy team principal]. It’s definitely good to have Patrick’s influence but you can’t bring one person in and expect everything to change. It’s a patient process.

You have tested a Mercedes-AMG car in Bahrain. Were you able to pass some of the learnings forward to the team?
Definitely. It was a great opportunity because I got a chance to see what a good car feels like, so I could come back and say what areas we should focus on. Nothing confidential, but I knew what was possible.

You spent the last season with the championship-winning team. Do you believe that Williams will be able to achieve the same level of greatness?
Not next year, but for 2021 there’s big regulation change and who knows what will happen then. Hopefully everyone in Formula 1 will be brought much closer together, but we must wait and see.

Amid some rumours that you might be going elsewhere, are you confident in staying with the team for next year?
I have a contract with the team, so there’s nothing more to add.

In your current situation you and Robert Kubica are responsible for bringing the team forward but at the same time you want to beat your teammate. How do you balance those two approaches?
There’s no balance at all. We are fully focused on pushing the team forward. We have no interest in fighting each other for 19th position, we are only interested in moving the team further up the grid.

What was the feeling of participating in your home race as a rookie in F1?
Silverstone was an amazing weekend, not only because I’m British but because the atmosphere was so special, and the fans were amazing. Silverstone is such a great circuit, so all of it together made it an amazing week.

As you know some F1 fans are very passionate about some topics, including the current form of Williams. Do you have any response to them, or do you let the driving to the talking?
I think it’s great to see how passionate they are for Robert and this is nice to see. Everyone can have their own opinion and I can’t stop them from that. I’m always trying to be respectful to everyone. Robert and I have a great relationship and I’m sure he doesn’t feel the same way. Sometimes you don’t have a clear mind when you are so passionate about something and I hope that some day I will have fans who are as passionate for me.

You are coming to Poland later this month for an event in Gdynia. Did you take part in anything like it before?
I have never done anything like this, apart from the Goodwood Festival of Speed, which might be comparable. Both drivers will be there, we will be doing street demonstrations and a lot of fan interactions. It will be a great weekend with a lot of action. We will put a show for everyone, and you must come and be there! I’ll let you know afterwards if I liked it.